Tweets that costed my blog :)

Thanks to Abel, I have come to know that my blog-kinda-thing is now blocked in Ethiopia. Yes, my blog is now competent enough to become  a potential trait J. Most of my friends suspected that it is because of my tweets on #AJStream's yesterday show on the silenced freedom of speech in Ethiopia and the schemes used by the government to control everything.
Well I have collected my tweets, just for the record. See for yourself and tell me “yemeTenal weyes AyemeTenem” to be considered a threat.

This is status update of a facebook friend in Ethiopia
"I can't write, comment, navigate to group page and browse. Raila-Meles IT experts are working hard in order to break into my account and disrupt it. I am using public domain and they are monitoring everything in public domain by extorting the owners. They have all the means and materials to do whatever they want to do."
@YeEthiopiaLej @meetabel @AJStream @AJEnglish glad that information flow is uncontrollable and there are back doors even with DPI in place
@YeEthiopiaLej @meetabel @AJStream @AJEnglish no surprise that is the Telecom we know.
@africamedia_CPJ exactly I would not be surprised if the next draft law would be criminalizing anyone that watch medias other than #ETV
@meetabel @AJStream @AJEnglish Ethiopia has >90m people and has 1% IT penetration which is 900K that is not even 1/4 of the ppltn of #Addis
@universallibert @soleyana @abelpoly Prof.Berhanu was awesome :)
@universallibert @soleyana @abelpoly Nati tenananeqeh ayzoh  ,enem seraye teche sebere legeba new
@meetabel @AJStream @AJEnglish They'll have to confiscate all the s.dishes that r installed in almost evry house or come up with a draft law
@soleyana @universallibert @abelpoly @endalk2006 pps twitter is like chat with serious exchange of ideas,I like, #denqoro.yesema.let.yabedal
@meetabel @AJStream along with #CPJ and #theEconomist , btw both has their sites blocked in #Ethiopia
@africamedia_CPJ there was a program on #ETV the national TV about the impact of #facebook ,showing how unhealthy it is for the society
@universallibert @abelpoly @soleyana hahahah egna muhran
@meetabel #AJStream will soon be criminalized ,@AJStream has repeatedly tried to get the gov rep on today's show.
@AJStream thankyou for the show about the media oppression in #Ethiopia
@universallibert @abelpoly @soleyana if you follow #AJStream it could essentially be an evidence that you are the big T
@AJStream more that 127 sites are blocked in Ethiopia including CPJ and theEconomist
@AJStream the law is open to interpretation to an extent that it can be used against any one that has SKYPE or any VOIP on their computer
@Anteneh73  #AJStream show is about the "draft" law that marks VOIP illegal by #EthiopianGov that has a track record abusing human right
@Anteneh73 U R saying the same thing the #Ethiopian government saying about the journalist that is it holding behind bars :)
@Anteneh73 fair to who ? I really want to know who you are referring to.
#AJStream is going to host a show about the draft law that criminalized VOIP which Shimeles Kemal outright denied two days ago.
@AJStream the spokesman denied that the law was not intended to make SKYPE illegal but still criminalizes VOIP
4 comments:

Links and videos of the day

Ok so there is no work around to make an internet call without violating the new law or is there ?

"KeKu can still operate despite the new law because it doesn't require an Internet connection on the caller or recipient's part, CEO Manlio Carrelli told TechNewsWorld." :P

An anecdote from a facebook friend : A dialogue between a mother and her son who is eager to see his dads face on skype. Honestly it is a true picture of the ridiculousness of the new law.


I don't know how related it is and what the message it sends and/or why this program was done but they may tend to say facebook has a bad influence on people - tsere lemat , tsere edeget ,tsere hizib


Sweeteners are killings us


Now Egypt is also a stakeholder of our land

meanwhile we make shoes for China 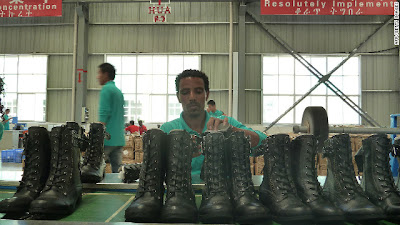 Our understanding is determined by our perpetual experience and our experience is shaped by what we are exposed to. What you will find below is the dialogue between Socrates and Glaucon. I found it to be really fascinating especially as it shows how misguided we are by what we see and experience – the things we don’t  see (shadows) but we certainly feel we know. It brought me back to our own shadows and made me look back at what I, as an Ethiopia, have really experienced.

Born in the time a regime that longed to see the fall of the ‘Chosen rule’ only to replace it with the ‘Chosen live’ and grew up in a regime of ‘No one shall live’ and/or ‘Everyone shall leave’. And that is for sure what me and my generation know.

The recent crack down on Internet security and media was refuted by most of us because it only entails  entrenchment of oppression but the truth of the matter and the question that we need to ask is Did we ever have it in the first place. We didn’t. We never knew freedom, property, security, expression, worship and resistance to oppression but what we know is their mere shadows. None of my generation was given that and none of the regimes, in their due time, ever tried to do so.

The misfortune is our rhetoric is derived from celebrating our victory not true liberty and this does not warrant an abiding freedom. It just vanishes as a shadow. So what we are experiencing now is not the real deprivation of what we had but the affirmation that we never knew had it.

Our cave, our crave.

Below the full dialogue

SOCRATES: AND now, I said, let me show in a figure how far our nature is enlightened or unenlightened:--Behold! human beings living in a underground den, which has a mouth open towards the light and reaching all along the den; here they have been from their childhood, and have their legs and necks chained so that they cannot move, and can only see before them, being prevented by the chains from turning round their heads. Above and behind them a fire is blazing at a distance, and between the fire and the prisoners there is a raised way; and you will see, if you look, a low wall built along the way, like the screen which marionette players have in front of them, over which they show the puppets.