What is your name ? 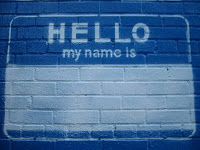 Missionaries in Africa were the upper hand in the conquest of invasion. There is an often repeated comment (a favorite with Archbishop Tutu), “When the white man arrived, he had the Bible and we had the land; now, we have the Bible and he has the land.” It is factual; in the process with the aim of making colonization complete, defacing the identity of a society is a stipulation – mother tongue given names being one.

Cultural and religions influence on names
Cultural products and norms vary across space and places as the human function changes spatially. Best example for this is the Yoruba people of West Africa, which is the largest ethnic group having its own language and religion, a religion which is interestingly comprised of the songs, histories and other cultural concepts which make up the Yoruba society. Yoruba people consider babies as the biggest gift and glorify the coming of a new life to this world as a greatest blessing. Giving names to babies has its own ceremony and convention which is exclusive only to Yoruba where as names are, at some regions, shared across culture with a slightly varying spelling. As in the case of Slovak people who share many names with Bulgarian, Czech, Polish and Russian people.

South Indian names tend to be mainly dedicated to the Hindu gods or the chosen class.For instance the name Balasubramaniam, derived from Sanskrit and meaning dear to the Brahmins – Brahmins are the upper class society of priests who are considered as the keepers of the belief. Same trend is since in Muslim names a new born is given a name probably in Arabic that uses names of prophets or the name of god (Asmaul Husna ) to give an honorable and beautiful name to newborns ,as it is considered that the names given to a person influences character.
As Ethiopia practiced Judaism in the pre-Christian times and even in the post-Christian some of traditions have been passed to the generations till present day. This tie is strongly seen in the common names between Jew and Ethiopian culture; both having Biblical influence. Judaic name are obviously more from the Old Testament where as Ethiopian Christian names a mixed of both.
Now-a-days Ethiopian Christian names are extremely becoming Biblical that it is hard to find names that are culturally proverbial. Even though it is palpable to see such a devotion to ones own faith it is at times concerning that this might eventually cause a disconnect between culture and identity. And this for two reasons:
Biblical names, even though the Bible is translated in different language, are not translated to the local dialect rather the pronunciation may be different for instance Naomi (ኖአሚን) is a Hebrew name which has a meaning of "enjoyment" which could be beautifully translated to Haset (ሃሴት) yet it is seen to be used largely as it is.


Consequently, using these names will deter the creation or birth of new local names. Names like Amran (አምራን) is rarely discovered.