Not all humiliations are forgiven

Few days back I read this article which I found the link posted on friend's page on face book. The blog is an eye witness’s report of an incident that happened in Addis. An incident  which numbs the nuance and the very thought that seeks for a refined-purpose. 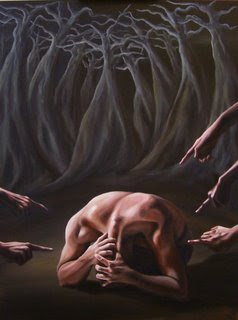 A father and a son were on their way to watch the football match between Banks and St. George, just the one thing a dad and a son can do in their men time. A robber, who was there to steal from any member of the  public and was being chased by the police, cut passed the father. Apparently the father could not do anything to stop the guy as he was protecting his son as it is the first obligation of any citizen; which requires family to come first.
Here is where the story begins: The police, the so called protectors of the public, held the father responsible for the escape of the thief and abused him verbally, humiliating him publicly in front of his son and everybody.
The policemen, who possess a mind or a conscience that is not any better than that of greyhound dogs that chase an artificial rabbit unaware of the race they are in, does not even know who they work for or does not understand what servicing the public mean and with the absolute evasion of the notion and fundamentals of human right. They called the father a sissy, for he wipe out of fear, intimidation and humiliation. They don’t seem to realize the contained power that humiliation ignites.
Bouazizi was humiliated in public and slurred at by municipal officers just because he was trying to earn a living and feed his family. He pleaded for his voice to be heard but none were willing to listen. He doused himself in gasoline and alighted himself. He became the beacon of an unstoppable revolution.
Our policemen should be careful about the buttons they press because once it ignites a spark there would not be any U-turn.And every head that has bowed, will raise.