from
http://www.mahletzesolomon.com/2011/02/tahrir-moments.html
Feb 7: Wael Ghonim ,the Google employee and one of the master mind behind this revolution got released after being detained for 12 days. But the intriguing commentary to hear was the word extremist used to label the United States if they don’t comply with the pro democracy protestors as they claim to be a freedom lovers; intuitively astonishing because it is just time that will change everything. A democracy used to window cloth stability will eventually need to be changed.
Feb 8: The workforce Tuesday, the labor force quit and walked out of their work place. Some what I felt that this revolution will really be successful. Not because the labor force is the back bone of Egypt Economy but because these are middle aged and older people who were somewhat skeptical about the protest. 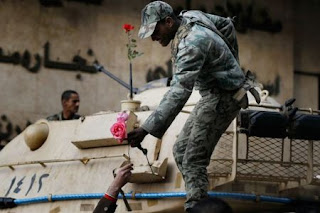 Feb 9 – 10:  Revolution escalated within its own momentum. And the power blinded President
once again deceived his people and betrayed his officials. What was going on his head was really erratic. But I so came to understand that power poison one’s mind making one incapable of being anything else but a dictator
Feb 11: The day of the Martyrs. Mubarak Left, yes he did .The jubilation. But not even in second while I am writing this I felt sad, felt sad thinking about those who paid the price for this day to come but hadn’t been able to see it. One of the activists whose was born few months before Mubarak came to power with tearful voice “All my life I have only seen one regime and a dictator president and I was longing for this day”.
As for us, we are happy for others and our happiness is so fragile because we haven’t got our own freedom yet. We are still not free.