See this picture ...
the passion and the anger that keeps one pushing 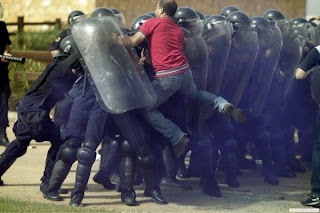 Then see this video ......
the lion heart that leads through fire
Then think of the verse from the Bible
ወጣቱ ብንያም በጕልበቱ በዚያ አለ፥
ገዦቻቸው የይሁዳ አለቆች የዛብሎን አለቆችና የንፍታሌምም አለቆች።
In the Ethiopian Church teaching Benjamin (Beniyam - ብንያም) represents faith and faithfulness, the faith that he revealed at the time the Hebrews passed through the Red sea is truly remarkable and is often cited in the teachings and sermon about faith. Benjamin, as opposed to the Hebrews who time and again became disloyal and faithless, was strongly absorbed and transformed by power of the Cross that was prefigured by Arch Prophet Moses.

The Hebrews, after their departure from Egypt, set out for the Red Sea. The Egyptians however, after burying their dead firstborn, began to regret having let the Hebrews go. Pharaoh, gathering all his army with chariots and mounted men, set out to pursue the Hebrews. He overtook them at the edge of the sea.

Upon seeing the terrible hosts of Pharaoh behind them, the Hebrews were terrified. Instead of supplicating God for help, they began to complain to Moses for bringing them out of Egypt. While offering them encouragement, Moses prayed in his heart to God and the Lord heard his prayer. The pillar of cloud and the Archangel St. Michael stood behind the Hebrews and hid them from the Egyptians. The Lord said to Moses, "Take thy staff and stretch thy hand over the sea and divide it." Moses stretched his hand and staff over the sea. Then the Lord sent a strong east wind which blew, and the water drew back. The Hebrews saw the water become like a wall on their right and left side and were afraid to step in the dry land with a concern of the walled water collapsing and drowning them under it.
In the midst of all this tribulation the young Benjamin came forth and laid his foot on the dry-shod fearless but with faith and courage that the God of Israel will keep his promise of the Promised Land.
A strong faith and invincible heart is what makes a person commendable and the fearlessness to be first to sacrifice knowing that things will never be the same again is what make one a Benjamin.

Email ThisBlogThis!Share to TwitterShare to FacebookShare to Pinterest
Labels: Ethics and Virtue, Spirituality