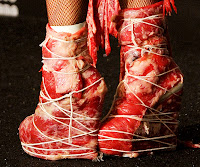 The 50 pounds meat outfit that was shredding the media the past week hit me in so many ways. I wanted to anticipate or philosophize and say something about it but I got engaged with different thought perspectives that cascaded or contradicted with one another that it made me feel like a chauvinist if I don’t relate and give meaning to it. A meaning that would that could be measured with the moral virtue as being right or wrong.
So where does the sense of right and wrong come from? For some God reveals his laws and they get elevated with his love which makes them commit to it for life. For others it is moral reasoning and the choice they make. But as the moral naturalist it is due to the observation and moral attitude built through the history of relationship which is the remedy for influencing and inspiring ሕሊና. Moral judgment is generally a moral behavior which will make an individual be more sensitive to others point of view. The thirst of recognition is sometimes the lack of being well equipped with fairness, justice and virtue or lack of being good at anticipating and feeling other people’s feelings and pain. Or in short not being able to go out of the Me zone.
(Me)’

Me compliment is about everything but me. It is about the hungry child who dies from deficiency of food or the unfortunate woman who gets raped on her way to night shift work or the father who could not afford to send his bright young boy to school or the people who year after year live in poverty and all those who does not have a choice.
Choice: the privilege to neglect an alternative. It is very intriguing to know what this small word can mean, there are people who starve (diet) by choice and those who starve not by choice some who are naked by choice and some not by choice but then again there are people who strive to succeed and gain superiority and there are some who abandon everything they have and decide to live in the wilderness.

Even though there is many ways of refining cooperative moral beliefs, a progression of reasoning takes up a major role. Consequently a meat dress an exclusive way of achieving recognition is outrageous for some domain and for some it is a question of even-possible since the need t
o eat has not yet been satisfied. This might not be an offensive deed 50-100 years from now because by then reasoning might have reached to a stage that positively justifies such action.
So where do we draw the line between reasoning and ignorance? For me the best reference is ancient history and most of all, the Bible. Because these stories really challenge our moral virtue and sometimes force to reconstruct our belief, views and the ground of fairness right from scratch. The best parable is Lazarus and the rich man. It represents the two faces of this world Lazarus the un-benefited, un-dressed, the hungry, the one that struggles to survive, the one with oozing sores -- therefore unclean and the weak and the rich man who dresses well and eats well and lives it up every day. Neither of them has chosen but were granted or favored through situations.
Lazarus Measures
Regardless of what happens in the afterlife the moral of the story is that if we are the benefited one in life we should seek the opportunity to think for and be sensitive about those who are in pain or disadvantaged and be able to respond more powerfully to the plight of an individual. This, I think, normalizes the awfully altered moral virtues of acting responsibly.

Email ThisBlogThis!Share to TwitterShare to FacebookShare to Pinterest
Labels: Ethics and Virtue